Creation of a Graph

Proof of Coloring for an Even- Cycle Graph

We can ﬁrst take into consideration the vertex colorings of a C2n and Cn +1 graph. A C2n graph has a chromatic number of two. We can prove this by way of induction. We can think of induction as a set of dominoes. It is simply the process of stating that if one property can be proved in a graph, (if one domino can fall over) then the rest of this graph family follows the same logic (all the dominoes fall over). 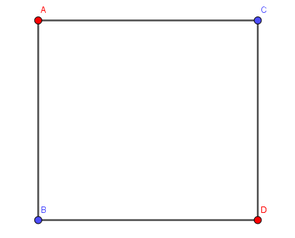 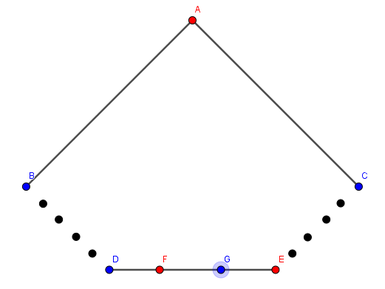 ​We start with our Cn graph and add two vertices along the cycle and color them accordingly. Without generality, since the nth cyclic graph is assumed to be 2 colorable, then we know whenever we place these two vertices we know that they are either adjacent to a red or blue vertex. Therefore, we know that we can color the vertices either red or blue depending on what they are adjacent to

Proof of Coloring for an Odd- Cycle Graph 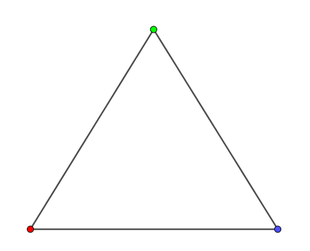 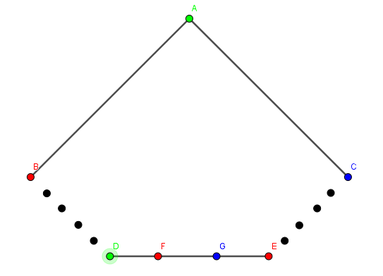 We start with C(2n+1), which has been assumed to have X(C2n+1) = 3.  Without generality, since the nth cyclic graph is assumed to be 3 colorable, then we know whenever we place these two vertices we know that they are either adjacent to a red or green vertex. Therefore, we know that we can color the vertices either red, green, or blue depending on what they are adjacent to.

Looking back at our Dn graph, we can apply the logic taken from these proofs to explain that any Dn can be colored with either two or three colors. We’ve already established that this graph contains either a C2n + 1 or C2n subgraph. In addition, we’ve also already deﬁned a Dn graph to have every vertex along the cycle connected to P2. Each extended vertex that lies from the cycle has a degree of one. Given our existing knowledge of the P2 graph, ​we know that is has X(P2) = 2. This means that the attached P2 graph only requires one color not in common with the vertex it is adjacent to. Because of this, we are able to understand that the P2 graphs will not aﬀect the chromatic number already established by the Cn subgraph. 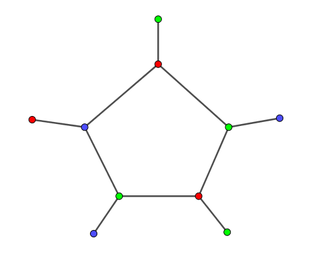 We can refer to our knowledge of the Dn graph to demonstrate that this is in fact true. We are able to attach an edge between one vertex of Dn graph to a vertex on a Dn + 1 graph without changing the chromatic number. This can be done because the pattern of cycle subgraphs for every Dn graph results in a chromatic number of 2,3,2,3, .... This means that as we move from graph to graph on the inﬁnite graph, there is always an available color.

​In our research, the primary goal was to further explore graph properties and vertex colorings. Although we completed this, due to time constraints, we were unable to investigate more aspects of graph colorings and inﬁnite graphs. A possible direction within this would be to be able to look at algorithms that determine chromatic number. As of right now, there are no possible algorithms that determine the minimum number of colors on a graph. In addition, if allowed more time, we would have liked to work with variations of inﬁnite graphs to determine the properties that result from them. Another possibility in this research would also be to look at labelings such as harmonious and graceful labelings